In our second episode of Ask The Expert, we recruited our Senior Acoustic Engineer, Stephen Entwistle, to answer all of your questions about studio monitors in smaller studios such as the home studio. See all of his answers​ in the video below. Enjoy!

Go to this episode's questions

Can an EQ and RTA fix a monitor problem? Should the engineer have a mono reference or twin stereo monitors? How can you treat tiny home studios?

These were some of the excellent questions you guys posted to our Facebook update. In this video, Stephen shares his suggestions and offers answers to questions about the equilateral triangle, subwoofers, and so much more. 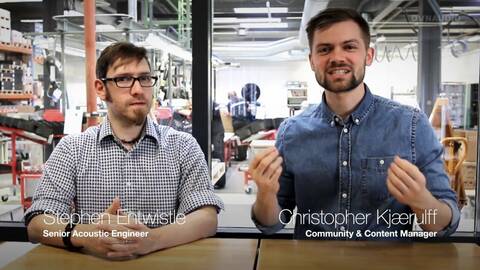 Question 1 - Sacha Hansler:
Can an EQ and RTA fix a monitor problem?

Question 3 - Seamus McManus:
Mono reference for the engineer instead of twin stereo monitors

Question 5 - Philip Paske:
Is it possible to treat a very room?

Questions 6, 7, and 8 - Rob Rodier, Simon Magnusson, and Julian Rodriguez:
How should I place my studio monitors?

Question 9 - Dom Capello:
What to do when you have null in a heavily treated room

Questions 10 and 11 - Jérémy Savry, and Jan Lindvaag:
How do I set up my subwoofer?

Thank you!
We want to give a big thanks to all of those who posted questions. As we did last time, we'll make sure keep an eye out for any interesting questions to bring to the next episode of Ask The Expert.

All the best,
Stephen and Christopher

Want more Ask the Expert with our development crew? Check out this episode with Andreas Sørensen where he talks about our drive units.

Have you had a look at the new LYD 48 monitor? No? Click here to check it out.

While we're talking with the pros, why not listen to some Studio Masters as well? Click here to meet Daniel Miller (he discovered Depeche Mode!).

Christopher Kjærulff: Welcome to the second episode of the Ask the Expert. My name is Christopher Kjærulff and with me today I have Stephen Entwistle and Stephen is one of our senior acoustic engineers. And that is one great job title you have there Stephen. Can you tell me a little bit about what you do here in Dynaudio.

Stephen Entwistle, Senior Acoustic Engineer: I have just finished our new personal reference monitor LYD. My job is to kind of - pull everything together and deliver a great sounding product.

Christopher: Perfect. Should we move on to the first question?

Christopher: Ok Stephen we have this really interesting question from Sacha, who asks if it is actually possible to fix a monitor problem using EQ and RTA.

Christopher: Ok, you talked about reducing. Should people boost if there is a dip?

Stephen: No you should never boost. If there is a dip there, even though you put lots of energy to pink noise, even if you put more energy, there will still going to be a dip and all you are going to do is to break your speakers.

Christopher: Ok so to sum up?

Stephen: To sum up, you cannot truly solve a time domain problem in the frequency domain.

Christopher: Perfect. Ok Stephen we have a question from Mixx. He asked is there a reason why the  image on a pair of BM5A MKII is so good. Is it because it is small speakers?

Stephen: Yeah. What we tend to find is that smaller speakers image better than the larger ones because they have a smaller baffle and the drive units are closer together so interactions between them happen in a higher frequency so hopefully out of the audio band.

Christopher: I know you mentioned something about artifacts to me earlier. Can you explain what those are and how they interact with this image?

Stephen: So there is… The artifacts that we get are – edge diffractions and the actual interaction between the drive units themselves. With the edges, what tends to happen is the edge becomes another source and that source that interacts with the original source, which is the drive unit, and that causes distortion and time smearing and the time smearing and the distortion of the artifacts that cause the stereo image to collapse. So the smaller the speaker the image is better.

Christopher: We have another question from Seamus and he asks, Stephen, how do you feel about a mono reference for the engineer instead of a stereo.

Stephen: For me, if the stereo setup is good enough, you don’t need a mono speaker.

Christopher: Ok -  and it's just that simple?

Christopher: Ok. So could you actually use this for – as a test for the quality of the speakers?

Stephen: Yeah we use it in LYD to test the quality of the speakers, how well they image. Just to make sure that the image – when it is mono is the same as if it is in the left or the right speaker.

Christopher: Ok Stephen we have this really interesting question from Roelof – that leads into room treatment. He asks about – can you use 20 cms of glass wool as a bass trap.

Christopher: That would make it a bit inconvenient.

Christopher: Ok. And talking about room treatment, we have a question from Philip who asks how would you go about treating a very small room.

Stephen: The problem with small rooms is they are small and if you are going to meet the ITU specification the amount of treatment you would have to put in would make the room unusable. So you have to be careful what to choose to treat. There is going to be some bass problems. You can try building some bass traps. You have some flutter echoes from the walls so maybe you have to look at some diffusion on the side walls. But the trick is to make your room usable you have to remember it is a tool you are using for mixing and if you know your tool well, even with all its flaws, you can still do a good mix that would translate somewhere else.

Stephen: Yeah. You can use a bookcase as a diffuser. If you irregularly space the books, you can use them to diffuse the sound. If you want to be really picky you can go and look up quadratic diffuser and you can actually work out how  deep the books need to be, how far apart they need to be and it will work as a diffuser. Another thing you can do if you have got space is to put a fabric covered sofa in the middle of the room – just like I talked about the glass wool it would absorb the frequencies as an absorber in the middle of the room and it works quite well as well.

Christopher: That is two pretty good tips right there. Can you try and sum it all up?

Stephen: Yeah you got to be careful in a small room. The temptation is to over treat and you end up with a room that is unusable or it is gonna fatigue you. You cannot spend more than half an hour in there without going crazy. So just be careful what you do and keep it to a minimum.

Christopher: Stephen, We have got a couple of questions from Rob and Simon and Julian. They are all asking about speaker listening positions. More precisely, they are actually asking about the equilateral triangle. Can you try and explain that?

Christopher: So that is it?

Stephen: That is it.

Christopher: That is pretty simple.

Christopher: Could you try and talk a little bit about the height of the setup?

Stephen: Yeah that's more tricky. What happens is you got your monitors on the desk and you got a reflection of the desk which interferes with the direct sound. The higher up you can get the speakers off the desk the lower in frequency that interference happens. But it is something you just have to play with and see which one you prefer.

Christopher: So Just try it out?

Stephen: Just try it out.

Christopher: That is it. Ok Stephen we have this really interesting question from Dom. He actually provided us a graph for you to look at and Dom’s problem is that he has treated his room with a lot of diffusion and trapping but he still has a huge null right in his mixing position. Can you comment on that?

Stephen: Yeah. From the graph, Dom, it looks to me that you got a desk reflection problem. That null is typical from what I would expect from your desk. You can try to integrate a subwoofer. I would suggest a higher cut-off frequency. Maybe move it around a bit. But also try moving  the speakers up and down to see if that helps to resolve that problem.

Christopher: Cool and we are actually going to talk a little bit about subwoofer, speaker placement right now actually.

Christopher: Stephen, I have two questions about the topic I know you are really passionate about - and that is subwoofers. The questions are from Jérémy and Jan. And they ask how they should go about setting up subwoofers speakers in the right way.

Stephen: We should talk about satellite subwoofer integration as well as subwoofer placement. So Ideally the subwoofer should be equidistance to the listener as the main speakers. So if you imagine a sphere around the listener’s head the subwoofer needs to be on the same sphere as the main speakers. Once you have done that, using our app, you can generate pink noise, use the RTA. So if you put the pink noise through all of your speakers you can look at the RTA - with the subwoofer out of phase you adjust the crossover until you see a strong null. When you have the strong null put the subwoofer back in face. Hopefully everything is nice and smooth -and then you are good to go.

Christopher: Then you are good to go?

Stephen: That is it.

Christopher: And the app is the Dynaudio Sound Meter right?

Christopher: Perfect. Thanks for all the questions guys. That was all we had time for today. I want to thank you Stephen for taking time out of your busy schedule to come help us out.

Stephen: it is a pleasure.

Christopher: Remember guys to subscribe to our YouTube channel. Where you will get all the latest Ask the Expert videos. See you next time!

How to place and calibrate your speakers