A job of execution: meet Michael

Having experts in all sorts of different areas of the music business is essential to Dynaudio. And, we are proud of it. If you have already watched our Ask the Expert sessions, you might have met Otto, Stephen, or Andreas already. Now, it is time to meet the next expert: Michael Munch.

But Michael’s area of expertise is a bit different and has little to do with his job as a Product Manager at Dynaudio. Dynaudio employees are involved in all different kinds of the music industry, so we often have experts in fields we don’t even have products in ourselves.

Once a year, Michael spends a week at Smuk fest, Denmark’s second biggest festival, but he isn’t there for the music. He’s there because he’s the Stage Manager for Bøgescenen. A legendary stage that has hosted names like:

We wanted to learn more about this (let’s be honest, quite amazing gig), so we cornered Michael and forced him to share a bit about the job.

It’s also a job of execution. The pre-production crew develops an execution plan that I carry out rigorously to make sure everything comes together as it should and as agreed on.

Hi Michael, thanks for taking the time to talk with me – well we didn’t really give you much choice. Before we begin, tell me a little about your job at Dynaudio?

No problem, I am happy to be here. I’m a Product Manager, and I work exclusively with our Install products. Right now, we are focusing on the Custom Install segment and are developing some very exciting new products.

Talk a bit more about that…

Well, we are in the midst of setting a course for the category: where do we want to be in the segment, what type of products to we want, etc. So, I am spending a lot of time with our customers, with installers, and with our distributors; learning more about their needs and how we can meet them.

But most importantly, we also want to adhere to our Dynaudio values and heritage. It’s very important to us that it sounds like a Dynaudio product should sound.

But, one year a pipe sprung a leak and flooded the whole thing.

A job of execution

Okay, I think we’ve warmed up, so let’s talk about festivals - and SMUK FEST obviously. How did you start working with festivals?

I have always been in the live music industry, first as a sound technician, then in the production part of the business, and now as a Product Manager.

The connection to SMUK FEST has to do with the early years of my career. Sound Technicians are often employed by businesses that help produce festivals, and so was I. I worked for a company that had contracts with Roskilde Festival and was actually responsible for sound on Orange Scene (the biggest stage on Denmark biggest festival).

And that led to you becoming a Stage Manager?

Yes, I started getting a lot of ‘side jobs’ as Production Manager and Stage Manager.

Okay, I need to know: what does a Stage Manager do?

The Stage Manager looks at the entire setup. His job is to coordinate everything with the different production crews: power, light, sound, video, etc.

It’s also a job of execution. The pre-production crew develops an execution plan that I carry out rigorously to make sure everything comes together as it should and as agreed on: how much space has each artist been given, how much power has been requested and agreed on, how much of their own production can they put up. All of that.

Moving tons and tons of gear

That sounds like you have a lot of loose ends to keep track of and solve. Do you do that by yourself?

No, I have a lot of staff to help me, which means I have around 120-140 people, with back-ups if needed, at my disposal.

We help the artist’s production crew with anything from emptying trucks, moving around several tons of gear: power cords from the stage to the soundboard, hard disks and computers, keyboards and guitars, monitors and I could go on.

And it’s not easy. We’re working in a forest, so we don’t have a lot of space. It’s like a giant game of Tetris. We make numerous deals with the artists and their crews, so everybody knows when to come and go, and when and where to offload their gear.

It isn’t and sometimes things can get a little heated. Especially, when the production crews realize we weren’t kidding about the stage being 13 meters wide; it’s a shock to most bigger international productions even though we explicitly inform them about it. But hey, they are used to work on stadium stages that are up to 40 meters wide, so it’s understandable that they become a little overwhelmed.

How do you deal with heated tempers – any tips?

For me, it’s all about creating the right mood from the get-go. The festival has arranged for a cook and barista to make breakfast when the crews arrive in the morning. Most people get in a good mood when I say:

“Hi guys, there’s breakfast right over there, and the chef will make you omelets, eggs and whatever you want. Tell us what needs to be offloaded and we’ll get started. You guys can join in when you have had a cup of coffee and something to eat.”

Everything runs a bit more smoothly after that. In my experience, it is important to create a good atmosphere from the start; create a good mood among people and they work better together.

Rain is the worst. Ever.

Okay, last question from me before we turn you over to our Facebook followers. What’s the absolute worst that can happen?

That’s easy. Rain. And it’s something that we get quite often, so there’s always an emergency-rain-team standing by with tarps and covers.

But that’s not always enough. The soundboard is some distance from the stage, and they are separated by the audience; power cables and wires are pulled through underground pipes to connect the two. But, one year one pipe sprung a leak and flooded the whole thing.

We had to work around the clock pulling cables across the entire audience area to fix it; in the pouring rain which wasn’t exactly fun.

Do you have a question about loudspeaker drivers, you’re itching to have answered? If you do, it’s time to find Dynaudio on Facebook and write down all of the questions you have. We will select as many questions as we can fit in an episode of Ask The Expert and release the video with Andreas’ answers the 20th of June on our website, YouTube, and Facebook. So, make sure to connect with us on Facebook and subscribe to our YouTube channel. 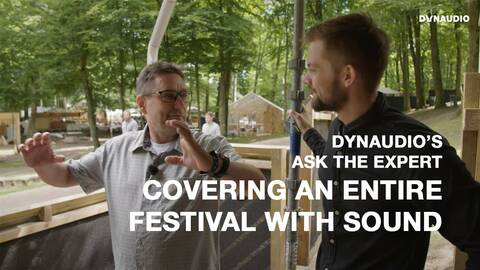