Through more than 15 years of dedicated service, Roland Hoffmann, Senior Manager of the Dynaudio Academy, has accumulated more knowledge about Dynaudio technologies than most. His current position: created because of that knowledge and a desire for applying it the best possible way.

In the seventh episode of Ask the Expert, we have invited Roland inside our studio (an office we steal from our colleagues at the assembly factory) to guide us through the active crossover and help answer your questions on the matter.

But, before we jump into the deep end, we sat down with Roland for a chat about this current work: travelling the world, meeting customers, and applying his knowledge by introducing Dynaudio loudspeakers to our partners and customers.

How long have you been at Dynaudio, Roland?

I started working for Dynaudio in 2001. Initially as a marketing and product manager, but after some years I became much more involved with the final stages of the development process. I was becoming a link between our development department and our customers – answering questions about our products and technologies.

So, I gained a lot of knowledge about our products, our technologies, but also how to place and calibrate them because I had to demonstrate all of it to our dealers. Now, we’ve decided to use my knowledge actively in educating about our speakers and tech through the Dynaudio Academy for distributors, dealers, and customer events.

It’s my job to ask a ton of critical questions

And you are the senior manager for the Academy, tell me about that role – what do you do?

I visit our partners all across the world and introduce them to our latest products. I also meet many Dynaudio customers at hi-fi shows and dealer events. One of my latest trips was to Australia, and while it’s a long way from Skanderborg, we have some very dedicated Dynaudio dealers and customers there.

In my mind, Academy sounds too much like I am conducting a lecture at a university: 20 PowerPoint slides and I’m out. That’s not it at all. We get very practical with our tech. It’s very hands-on, very practical in nature.

Because I meet with so many customers, I get a lot of feedback. Sometimes I can predict the kind of questions that will come up when a product is released. It’s my job to ask a ton of critical questions in the final stage of development.

Also, I have to have an incredibly deep understanding of both product and technology. I can’t say: “Uhm, I will have to ask an engineer” when I am introducing our latest loudspeakers to the dealers.

Got a question for this expert or the next? Send it to us and we might feature it in the next episode of Ask the Expert.

And because of my interaction with customers, I can offer a different perspective. I can point out something the customer would or wouldn’t want in a particular solution – and we still have the ability to make the necessary alterations, as the question was voiced at the right time.

They have never said anything, or even hinted at it, but I can’t help to think that our engineers, once or twice, have rolled their eyes and thought: “What’s with the third degree, Roland?” 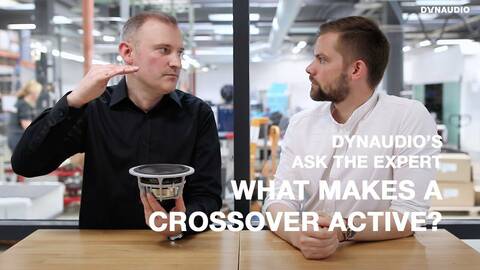 Listening for hours and hours

Haha, so what happens after the ‘third degree’?

When our engineers have recovered from my questions, they send me a prototype of the loudspeaker. I just spend hours and hours going over them: setting them up and listening, changing position and listening some more, change something else and listening again. And then I do it all over again.

And it’s time well-invested. This is where I get to know the loudspeaker, and in that process, there might come even more questions for our engineers. This is where we can make small adjustments – you just don’t have that opportunity when the speaker hits the street.

With the Focus XD, I asked some questions about one of its features: the speaker position EQ. At first, it was called bass EQ, but that wasn’t particularly descriptive of what it actually does.

Yes, it tunes the bass response, but it is much more intelligent than so. It takes the speaker’s position into account, which is essential for this wonderful feature. We needed to make sure that was communicated clearly to the users.

In that process, of pouring over every little part of the speakers, do you take them apart?

Sometimes. With the new Contour, I had the chance to spend time with the acoustics team who built it. We walked through and dismantled drive units. They talked me through all of the new technologies and the many changes they had made. We went about it so thoroughly that I didn’t need to unmount anything. I just had to listen.

But, I have to admit that I did pull the original Xeo speakers apart. After the first demo, I just loved what our development team had managed to do with these small boxes. So, when I received the prototype I had to have a look inside. The size of that amplifier module will surprise you – it’s so small. My first thought was: “That’s it? Why does it sound so good?”

We played Forza Motorsport on his Xbox... on a 5.1 Evidence surround sound system

Feedback does lead to change

Let’s revisit what you said about feedback. Obviously, you use it to ask tough questions, but how do you sift through it all?

It’s a mix between quality and quantity. The feedback has to be of a certain quality that’s a given. The next thing we look for is patterns – for repetition. When the feedback starts ‘breaking’ geographical or cultural boundaries, we start to pay attention. If people say the same in China, Germany, Uruguay, and South Africa – both to me in person and online, then it starts to carry real weight and has value for our development department.

It has just happened with the Focus XD to some extent. We had feedback from in person training sessions that matched with not only online feedback, but with our own ears. So, we combined our continued research in active crossovers and DSP with feedback to create a new firmware update that improves the Focus XD drastically.

You talk about ‘crossing boundaries’, do you get wildly different feedback from the different countries you visit?

Surprisingly no. Despite the different customs of many cultures such as food, architecture, and music, the people I meet often love the same qualities in a Dynaudio loudspeaker. It’s very consistent.

Okay, I have one final question, Roland. It’s in the more casual end of the spectrum. What’s the one experience that really stands out. What’s the most different thing you’ve come across when travelling?

Haha, well… There is one particular experience that stands out quite clearly. We once had a dealer in the United Kingdom, and his showroom was in a castle he owned. And he only carried really high-end brands, so he also had our Evidence; but his music system was different than one would expect…

He brings me into this huge entertainment room, and what do I see? A 5.1 Evidence surround sound system. It’s huge, I mean a single Evidence loudspeaker is almost two metres tall and there are four of these, an Evidence Centre, and subs.

And while I’m still a little speechless, he asks me if I want to play Forza Motorsport on his Xbox.

I actually recall feeling slightly torn during our game. Part of me felt this must be the coolest Evidence experience I ever had, but I also thought: "I’m not so sure we developed our finest Dynaudio speaker for THIS.“

But then I remembered I was in a castle so it was alright.

This is your opportunity to ask our next expert, Roland Hoffmann, any question you might have about active crossovers, how they work, and what we can do with them (we've for example just change the active crossover in our Focus XD series - through a firmware update!). If you have an active crossover itch, this is where you can get it scratched.

Click here to ask Roland your question about active crossovers.

Liked that? Read this…

In the fifth episode of Ask the Expert, Jan dropped some serious DSP knowledge.

Not sure how to set up your speakers? Otto is ready to help you out…

Want more Roland? We don’t blame you. Watch as he shows Soundstage! InSight the Dynaudio factory

How to clean your speakers - video guide