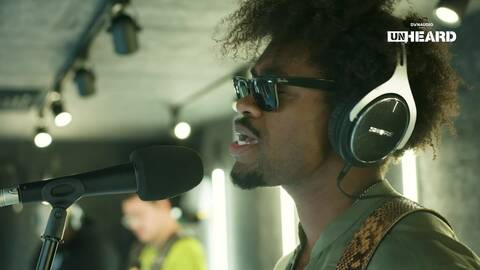 We opened the day in funky style with east-coast-based One More Day. These soulful funk musicians ended up spread across the country after finishing college, but somehow they still managed to produce a full-length album despite having hundreds of miles between them. With One More Day in the driver's seat, the morning was more upbeat and energetic than the relaxed singer-songwriter mornings from previous days - to the delight of their audience (at least those not affected by friday night's NAMM parties).

Stephen James from Los Angeles entered the studio around noon. Being a local artist and producer, Stephen James brought an impressive set of instrumentalists from the local scene. Together they produced a silky smooth sound that had everyone chilling in the Californian sun.

At 1.30 pm the legendary saxophonist and jazz musician Kirk Whalum stopped by the touring recording studio for an interview about 'good,' his humanité project and mentoring youth. After the interview, Whalum decided to give an impromptu performance together with John Stoddart on keys. It was a goosebump-inducing performance by two world-class entertainers, who also had a message to our Unheard artists: "Keep going. You never know when your big break will come. Work hard and believe in yourself."

A bass player first, Trevor James decided to change directions and focus solely on his own music two years ago. Since, James has been writing non-stop and brought his own original alternative rock to Dynaudio Unheard. And wow did he bring a groovy vibe to the Grand Plaza, entertaining the audience with both his music and charming demeanour.

To cap off a wonderful day, Cliff Beach introduced the NAMM audience for his brand of upbeat and energetic 'nu-funk:' a sound influenced by soul and R'n'B that uplifts spirits by many per cent. Cliff Beach band played as the sun set over the third day of the 2019 NAMM Show to the joy of party-ready onlookers.